Did you know that you can get from Paris to Antwerp by train in just two hours? I didn’t! It was so easy that my husband Nowell and I added it as a stop on our recent trip to Paris, The Hague, Amsterdam, and Vienna, and I’m so glad we did!

View of the Cathedral of Our Lady of Antwerp from Groenplaats square. The statue in the middle is Rubens

We were originally planning to fly from Paris to Amsterdam, and while researching flights I discovered that the train is much faster, cheaper, and also easier (because trains take you right from city center to city center, instead of airports on the periphery). Then I realized that our train to the Netherlands would pass right through Antwerp, Belgium, which was the home of my all-time favorite painter RUBENS, so we decided to make a quick stop there.

While researching Antwerp, I found that the major museum there, KMSKA, has been closed for renovations for a decade but would be opening just a couple days before we arrived, so the trip felt particularly fortuitous.

As soon as we got off the train we checked into our hotel and went right over to the Cathedral of Our Lady Antwerp to see the major Rubens works installed there.

Seeing paintings installed in a cathedral is always a moving experience, but seeing the enormous scale of these works was simply overwhelming. I have drawn sketches of all three of these works from relatively tiny reproductions throughout my entire art life, from as early as undergraduate art school and as recently as last year, and never realized the impact of their scale.

The following morning we toured Rubenshuis, the home and workshop he built for himself where he lived and worked for 30 years. I think I was expecting something like a wooden warehouse where a staff of 20 apprentices would help him create large works…. what I did not expect was an Italian Villa!

Apparently when Rubens returned from almost a decade living in Italy he decided he needed to recreate the inspiring environment there, so he just built it for himself, including an interior courtyard with an arched portico and carved reliefs.

I was surprised by how busy it was: Every room was crowded even though it was the last week in September and the restaurants and streets had few tourists. It’s likely the opening of the renovated museum had attracted an unusual number of Rubens fans to Antwerp for the week. I was frustrated that there were very few written placards explaining what we were seeing, and many of the paintings were unlabeled except for a QRC code for the audio guide. The audio-guide was in English, but it had too many musical interludes and almost every sentence is a low-information musing like “What would Rubens think if he were to see his house now?”. As a painter I want information about exactly how he lived and worked in the spaces, and surely this has been studied and recorded, but it is not presented to the visitor. The light in his studio spaces has been destroyed: windows are screened by translucent shades and the ceilings have yellow spotlights shining yellow beams on the artwork. As I told my husband, if you destroy the light in an art studio, you lose the feeling of it.

I did love seeing this large unfinished work mounted in his studio. It has bold black, unhesitating linework showing evidence of the composition being developed and altered in paint, instead of the common practice of transferring a preparatory drawing. You can see in the first shot how distractingly yellow the spotlights were, but I managed to get better color in the closeups:

It was also a real treat to see this self-portrait of Rubens done when he was around age 50. I was disappointed that the young student Van Dyck’s self portrait was normally there but replaced by a placard saying it was on temporary loan… but if I had read it more carefully I would have known I would see it later in my trip. Instead, it was a pleasant surprise to come across it in Vienna the next week!

We went right from Rubenshuis to the newly-opened Royal Museum of Fine Arts Antwerp (in Dutch it’s Koninklijk Museum voor Schone Kunsten Antwerpen, so the easier name to remember is KMSKA) which is an important collection of Dutch art, including many large-scale (and gob-smacking!) Rubens paintings:

Rubens: Christ on the Cross, Martyrdom of Saint Christina, and Enthroned Madonna Adored by Saints

Rubens arranges his figures and draperies in a complex spiral, so as your eye travels up into the painting everything feels like it is moving, almost like you are seeing through a modern cinematic camera flying through a swirling action sequence. Seeing these large-scale works in person made me realize the primary intention is to overwhelm: You can’t logically analyze what you are seeing: You just find yourself dragged into the scene.

I love seeing the details close-up in person, so I can imagine the feel of the brush as it creates golden hair or translucent flesh.

Holy Family with Parrot by Rubens, 1633

This painting of Mary and a very large baby Jesus was originally smaller, but the canvas was enlarged to include a somewhat roughly-painted Joseph on the right and this glorious parrot on the left. The parrot traditionally symbolized purity and was associated with Mary, but its anatomy and gesture seems to me to be observed from life and looks to me a like a flourish of the master’s ability. Parrots were expensive imported pets, and along with purity they can symbolize extravagant wealth. In this case, this painting was not commissioned but was gifted by Rubens to his guild. So this makes me wonder: Is Rubens showing off his wealth and success as a painter, as well as his ability?

Even though the theme is the return of the prodigal son, the human action is taking place only in the lower right corner, and most of the composition is dominated by these gorgeous animal portraits. Maybe Rubens is showing that these parents take good care of their animals, so they will likely treat their returning son as well as they tend their animals? I love the active movement of the restless horses, and the thin transparent paint on the reclining dark cow, where the black is scumbled only lightly over the brown underpainting showing through.

And then the Dutch still lifes… THE DUTCH STILL LIFES:

And of course I love finding an artist’s reflection in their still life:


Our main mistake this day was failing to eat lunch between Rubenhuis and the museum. The museum has a very nice restaurant where we planned to eat, but the line to be seated was 40 minutes long on this popular opening week and we didn’t want to waste so much time with only a couple hours left to see the museum. So as sometime happens while travelling, we surreptitiously scarfed down a shared nut bar scrounged from Nowell’s pocket, and forged on through the museum. We did have an incredible dinner at a Belgian restaurant called De Pottekijker, which we highly recommend. Dress in layers though, when it’s chilly in Antwerp they heat their restaurants VERY well!

Various shots of Antwerp, including the dramatic spire of the Our Lady Cathedral and our amazing dinner!

How I Choose a Hotel when Travelling

Our lovely little hotel in Antwerp was Maison Nationale, which was walking distance to everything we wanted to visit and has beautiful and affordable little modern suites, an elevator, and very kind owners! This is my secret for how I pick good hotels when I travel: First I choose the general area I want to stay in by pinning the major sights I want to see on Google Maps, and then I do a google search for “city name, neighborhood guide” to find other travel blog posts recommending which neighborhoods to stay in. Then I use Google Maps to search for hotels in that area, and I filter for anything above a 4.5 google stars rating, within my price range. To narrow it down from there, my best trick is to look for room photos showing a white duvet cover on the bed. After staying in many “quaint” cheap European hotels with with heavy brocade curtains over the bed and old carpeting and finding that they always smell like cigarette smoke, I now always try to choose a freshly remodeled hotel, preferably with bare floors…. and those tend to have fresh white duvet covers. It works! We loved every small hotel we stayed in on this trip.

The central train station in Antwerp is architecturally stunning and a “top 10 sights of Antwerp” destination in itself, so we had to stop and take a quick snap before we hopped on a quick train ride to The Hague.

I’m so glad we decided to make The Hague our home base in the Netherlands and make daytrips to other places from there, because it turned out to be an excellent decision. The Hague is beautiful, walkable, has much cheaper hotels than Amsterdam, plus it has excellent restaurants and easy public transportation to everywhere we wanted to go. Because we stayed there for six nights I even had enough time there to visit the incredible Mauritshuis museum twice! Stay tuned for my next blog post about our stay in The Hague…

If you have not yet, sign up for my newsletter so you never miss one of my information-packed blog posts. Also, I am currently working on a new painting video to be released by the end of this year. “Glazing and Scumbling a Still Life with Roses” will be a follow-up to my original “Glazing and Scumbling” online course, so I recommend getting that if you have not yet, to get the most out of my next release!

How to Connect with Art Galleries

Thu Oct 27 , 2022
by Carolyn  Edlund How can artists approach galleries and gain representation?     Before you get an offer from a gallery and sign a contract, you must be noticed and then get your art in front of the decision makers. That involves knowing how to select galleries to approach. One […] 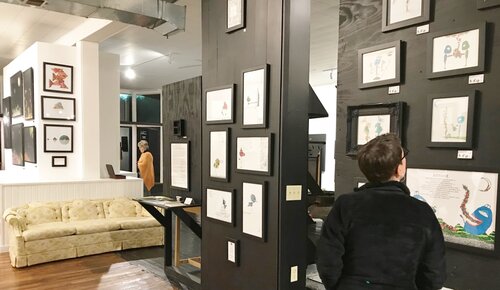